The realms of Narnia: the geology of a film location

The Chronicles of Narnia by C.S. Lewis enchant children and adults equally. Through the imaginary world of Narnia, we enter vast mesmerizing surreal landscapes. We'll take you on a walk through the sandstone mountains of the Broumosvko Nature Reserve in Czech Republic, to discover that these realms are not invented. They exist. And the geology of Narnia is as impressive as the film's great scenes.

It is well known that big blog buster movies select big film locations, for example Mount Ngauruhoe in New Zealand for Lord of the Rings. Such places acquire a mythical status and become tourist attractions. For Narnia, the movie-makers chose the less known landscapes of Bohemian Switzerland in the Czech Republic. This article describes the fairytale-like landscape and its natural history. We'll walk all the way from the village of Teplice na Metuji to  Adršpach, passing through the Gate of Narnia.

In the northeast of the Czech Republic, near the Polish border, the bedrock consists of sandstone rocks that extend north into Poland and west into Germany. This sandstone region is part of the Elbe Sandstone Mountains and the natural reserves of Little Switzerland and the Bohemian Paradise are part of it (Elbsandstein Gebirge in German or Labske Piskovce in Czech). Listed as UNESCO World Heritage sites, they are popular destinations for hikers, cyclists and climbers. The lesser known of these sandstones are located in the national park of Adršpach in the Broumosvko Nature Reserve (Brauner Bergland in German or Chko Broumovsko in Czech), where the Gate is located.

The sandstone landscape is a maze with deeply eroded rock outcrops and many rock columns, pillars, cliffs, boulders and other peculiar shapes. In the gorges, there is a microclimate keeping the temperature at freezing point until late spring. The chill lingers in the narrow gorges, and there are even some patches of snow. Glimpsing up to the individual rock forms, you can see different shapes, faces, bodies, animals, etc. At the end of the walk to Adršpach, the Gate of Narnia is located. This unreal monument vaguely reminds of Buddhist temples in Angkor Wat in Cambodia; so foreign and unlikely to be found in Czech Republic. 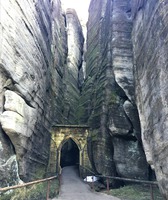 The gate was built in 1839 by lord Ludvík Karel Nádherný as a second entrance gate to the rock maze. Back then visitors who wanted to see the rock landscape had to pay an entry fee already. It is probably one of the prettiest cash desks I can think of. 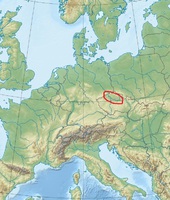 Location of the Bohemian Cretaceous Basin in red.

How were these sandstones formed? First of all, sand is formed as mountains and high terrain are slowly weathered down, by rain, frost, wind, plant roots and soil organisms. The loosened sediment (tiny bits of rock), including sand, is then carried away by rivers, and deposited downstream in low, flat areas, near the coast or in the sea, were the sand is redistributed by the waves and sea currents. After a long time, the sands become petrified to form sandstone. In the case of the Gate of Narnia and its surroundings, the sands were deposited in Late Cretaceous times, from 100 untill 86 million years ago, into a large depression, known as the Bohemian Cretaceous Basin. This ancient depression stretched from Dresden across the area north of Prague towards Svitavy (a town located about 70 km north of Brno).

The Bohemian Cretaceous Basin formed as a result of the collision of small pieces of earth crust (tectonic plates) from Africa with Europe, in the process of plate tectonics. This collision eventually formed the mountain range stretching from Alps, the Carpathians and the Tatra Mountains. Whenever two tectonic plates collide, as it still is the case between Africa and Europe, one of the plates 'dives' beneath the other and is dragged below it towards the Earth's interior, in a mechanism that is described as subduction. Due to the heat and friction of the down-dragging, some part of the rock heats up and melts, forming magma, molten rock. These batches of magma expand and ascend, and as the magma reaches the surface, a volcano is formed. That is why many mountain ranges are dotted by volcanoes. Further beyond, away from the mountain front, the 'sinking' tectonic plate makes the overlying plate stretch, thin, and flex downwards, making also the landscape above it sink. This way a depression or basin like the Bohemian Cretaceous Basin is formed.

But as geological processes start, they always act upon an already existing landscape with an even older geological history. Geologists typically say that processes in earth science don't have a specific starting point or date. An area is always already influenced by previous events.

The Bohemian Cretaceous Basin is nested against massifs or 'highs' of Devonian-Carboniferous age (390 to 290 million-year-old). They are part of the very old Variscan mountain chain (a term coined by geologist Eduard Suess), the result of a mountain building phase that affected Europe and the Appalachians in the United States. In Central Europe, the Variscan massifs include the Sudetic Highs in the north and the Rheinish-Bohemian High in the south. These massifs consist of granite rocks.

The sea in Central Europe

During Cretaceous times, these granitic highlands were exposed to wind and rain, which made the granite slowly fracture and wear down into sand. Rivers transported the sand towards the low-lying Bohemian Cretaceous Basin, where it settled and formed the famous Adršpachy Sandstones. The Bohemian Basin was a low area or a plain, in which multiple river systems branching out towards the sea. By studying the individual crystals in the sand grains, geologists can distinguish sands deposited in rivers or in the sea. Especially the presence of shells is suggestive of a marine origin for some of the sandstones.

Why was there a sea in Central Europe? During the Late Cretaceous, global sea level was much higher than today, and the lower parts of the continents were submerged by the Tethys Ocean. This ancient ocean, the precursor of the Mediterranean, flooded the Bohemian Basin and other parts of Europe.

But the African continent continued to push against Europe, and the mountain chain expanded beyond its original location. In this process also the Bohemian Basin started to rise, about 35 million years ago. This means that it stopped being a basin and has been, since then, an uplifted region or plateau, prone to erosion. It now lays at 500 to 700 meter above sea level. The sandstones became saturated with salty groundwater, an aggressive solution that, aided by rivers, rain, hail and wind, carved out anything that is not extremely resistant.

But the strongest force to erode and 'model' the Adršpachy sandstone landscape was the action of ice. Geologically, our planet is still in an ice age or cold period (having ice-capped poles). When water enters a porous sandstone and freezes, the expanding frozen substance acts like dynamite and the sandstone breaks apart. This happened during the last two million years, leaving only blocky boulders and pillars as remnants of an ancient sandstone "forest". Some of the pillars stand as high as 100 m above the region. Many of the pillars have their own story to tell and you can read about them as you walk through the sandstone maze.

You'll leave this place in awe of the natural beauty. Nature proves once more that it surpasses all manmade fantasies!

Read other articles on Monuments.

Go to all Articles 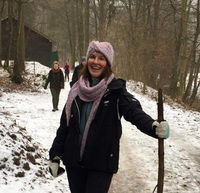 About the author: Dorothea is a geologist from Berlin and worked as an expert in plate tectonic in Germany, the United Kingdom and Belgium. She currently lives in Brno in the Czech Republic. Apart from work, she's an avid trail runner, cyclist and hiker, and she occasionally guides people through the countryside near Brno.

We use cookies to enable the proper functioning and security of our website, and to offer you the best possible user experience.

You can customize your cookie preferences here. Enable or disable the following categories and save your selection.