People once believed that the continents had always been in the same place. In the late nineteenth century, this idea came under fire. Explorers found indications of a more turbulent past. The idea of the continental drift was born, but it took a hundred years before the ultimate proof was delivered.

By the second half of the nineteenth century, the southern hemisphere of the world was annexed to Europe as colonies. Not only colonizers and settlers were sent there, but also scientists, including geologists, for exploration and fieldwork. Obviously, the goal was to discover and exploit natural resources. Yet these explorers had a second agenda.

They were driven by the urge to discover, under the guise of mapping mineral resources. They were given the opportunity to better understand nature in unexplored parts of the world. And they were eager to contribute to many fascinating ideas that flourished in those days. Dutifully, they sent their reports to Europe to be published in scientific journals.

Edward Suess, an Austrian professor of geology, read the publications and made a striking discovery. Certain fossil plants described in coal deposits in India looked suspiciously similar to those in South Africa. They indeed belonged to the same plant species. And the rocks that surrounded these plants were unmistakably deposited by glaciers. Suess, being the specialist of the Alps and glaciers, would not be fooled.

Were these areas, now separated by an ocean, once connected to each other? And was it freezing cold there?

An idea was born.

The plant in question, the glossopteris, was found in India and South Africa, and later also in Australia and South America. Suess christened his large, disappeared continent Gondwana, after the land of the Gonds, an Indian tribe. 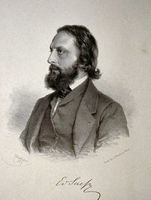 Suess published a book, Das Antlitz der Erde (The Face of the Earth) (1892) in which he described that the ocean that now separates both regions was a sunken land, but the continents themselves had stayed in place. You could walk from one continent to another. We now know that Suess was wrong, but his book and ideas remained widely accepted for a long time.

Finally, his ideas did not stick, but the name Gondwana did.

Meanwhile, the flow of new information from the tropics was unstoppable. There was increasing evidence that an ice-cold period had reigned simultaneously on different continents, followed by a less cold period with identical flora and fauna. And long before, scientists had already noticed that the continents' edges, especially those of South America and Africa, fitted together like a puzzle. For example, Antonio Snider-Pellegrini from France suggested in the mid-nineteenth century that the continents had moved.

The facts could not be ignored any longer. Once these continents lay side by side.

And then a German meteorologist came up with a completely new concept.

1858 maps of the Earth; by Antonio Snider-Pelligrini.

Alfred Wegener published his theory of the continental drift in 1912, which he described in detail in his book Die Entstehung der Kontinente und Ozeane (The origins of the continents and oceans) of 1915. The continents lay together in a large 'primeval continent', and the oceans in between did not yet exist. In doing so, Wegener went against Suess' idea of the sunken land and also against the scientific establishment. 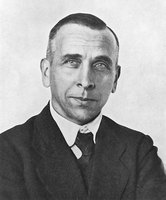 According to Wegener, at a given moment in time, this enormous primeval continent broke up into several smaller continents, to drift away from each other. Meanwhile, oceans formed between these continents. And as such, the current geography of the world came into being, with the continents distributed over the world, with large oceans in between. He based himself not only on the fauna and flora and the shape of the coastlines, but also on the fact that rock strata from South America seem to continue into Africa.

Sea organisms in the mountains

There were other 'strange' things on Earth that were not easily explained. It was very bizarre that fossils of marine organisms lay high in the Alps. Wegener proposed several mechanisms to explain this 'drifting of the continents'. Among other things, the centrifugal force of the earth rotating around its axis, or the variations in the position of the earth's axis (known as precession).

He also suggested the possibility of convection (heat flow) in the earth, but in later works he did not bother to further develop this idea.

Today we know that he hit the nail on the head with this last idea, but he'd never know.

The drifters vs. the fixers

The Americans in particular vehemently opposed Wegener's hypothesis of continental drift. The world was divided between the drifters and the fixists. Furthermore, Wegener was not a gifted demagogue and he did not defend his arguments well, and even less so in English.

It would take another fifty years before his theory was taken seriously, and the opponents reluctantly admitted that he was right.

Wegener himself would not live to know, he died in Greenland in 1930 at fifty years of age. But not everyone was against Wegener. During his life, he also had important supporters. The famous geologists Alexander Du Toit and Arthur Holmes strengthened the hypothesis, but also their arguments were directed against deaf ears for decades, until after the Second World War.

The Earth's engine according to Arthur Holmes 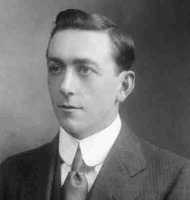 Arthur Holmes was an early 'drifter'. He did pioneering research on radioactivity and was one of the first people to realize that the radioactive processes inside Earth may well be the 'engine' of the planet.

An engine that produces heat and provides the power to make the continents 'drift' or float, as Holmes wrote in the last, audacious chapter of his book Principles of Physical Geology published in 1944.

How are we supposed to imagine such a convection cell?

Convection cells are large heat currents that rotate within the Earth's mantle, and around the Earth's core, not unlike large caterpillar tracks. The mechanism is as follows: Hot material at the edge of the Earth's core (heated by radioactivity) slowly rises to higher regions. (Hot material expands and is therefore lighter). Due to the rising of material, space is created below. Therefore, material from above needs to sink to fill the space. This rising and sinking creates a large moving circuit, a circuit of convection cells. It is the same process you can observe in a cooking pan with boiling water that is heated from below.

On top of the circuit, the broken, rigid outer shell of the Earth, consisting of the continents, 'floats'. It all happens at a very low rate, of a few centimeters a year. In a million years this adds up to a few hundreds of kilometers.

So how did scientists prove that the tectonic plates are moving?

As long as we could not study the ocean floor, or take measurements of the earth's interior, everything was based on speculation. The opposition of stubborn fixists took advantage of this. Overthrowing the establishment was not on their agenda.

Moreover, Europe was at war.

The woolly theories of crazy professors were not high on the priority list.

But peace came and in the spirit of progress and innovation, new techniques originally developed for war purposes could finally be used to study nature. A paradigm shift was imminent.

Earth scientists turned to physics for the ultimate proof, which was met in the field of geomagnetism. To understand this, we must know that the Earth is a big magnet. Magnets always have two poles (north and south) and a magnetic field. The Earth's magnetic field envelops our planet and protects it from the lethal solar wind. But it also does other things.

What is special about a magnetic field? All objects that are susceptible to magnetism, such as minerals containing iron and magnesium, will align to the Earth's magnetic field, like the pointers of a compass. When they form (e.g. when crystallizing from lava), they 'lock' the field in their crystal lattice. Therefore, you can learn more about the magnetic field of a certain time, by analyzing the crystal.

Large-scale research on minerals from old rocks showed that they were not aligned to the current north and south poles.

It seemed as if the poles were lost. Hence the term polar wander. Was there an error in the reasoning?

And then, suddenly, light shone on the truth.

The continents must indeed have been in a different place in the past. You have to move them around to align them to the north and south poles.

All paths of the southern continents led to Wegener's primeval continent.

This primeval continent was Gondwana. In Gondwana, Africa, India, Australia, Antarctica and South America lay united. The theory of continental drift was a fact. It was renamed to plate tectonics. The study of the earth and the continents gained momentum. 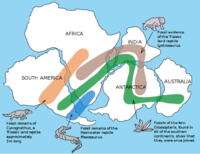 The 'primeval continent', Gondwana, and the distribution of fossil plants and animals.

The discovery of plate tectonics is not a sudden, coincidental discovery like Columbus who discovered America, or the discovery of a comet. No, the concept is based on a vague idea that was put forward more than 150 years ago and has come a very long way since then.

Most of the world's great scientific breakthroughs usually start in the higher regions of experimental physics and in expensive labs, ideas that then trickle down to the so-called less exact, muddy sciences such as biology or geology.

But for plate tectonics, it went the other way around. The ordinary field geologist with his hammer and his chisel, made important observations, began to speculate on them, shaping an idea, which then had to climb up, defying the skeptics, to be proven by physical rigor.

Today, plate tectonics is an indispensable part of earth sciences, and scientists suspect that on other planets and moons, tectonic plates are responsible for the observed irregularities.

We use cookies to enable the proper functioning and security of our website, and to offer you the best possible user experience.

You can customize your cookie preferences here. Enable or disable the following categories and save your selection.